The Eagle Mountain Project comprises two gold deposits, Eagle Mountain and Salbora, in addition to several other exploration targets. The deposits are structurally controlledac and affected by a zone of saprolitic weathering up to 50 metres thick. Gold mineralization starts at surface in saprolite (soft rock) and extends into the underlying fresh rock.

The Property is located approximately 7 km south of Mahdia Township (population ~3000). Mahdia can be accessed by road from Georgetown, a driving distance of ~325 km, or via air with a commercial flight.

Mahdia is a central mining location. Consequently, the local economy is dominated by small-scale mining activity and has a labour force and mechanical shops familiar with mining. Additionally, as capital of Potaro Region 8, the township offers a local hospital, school, shops, and a paved airstrip.

Unpaved roads and tracks from Mahdia provide access to and within the EMPL. Goldsource’s current field activities are supported by the 65-man exploration camp and offices on the Property. 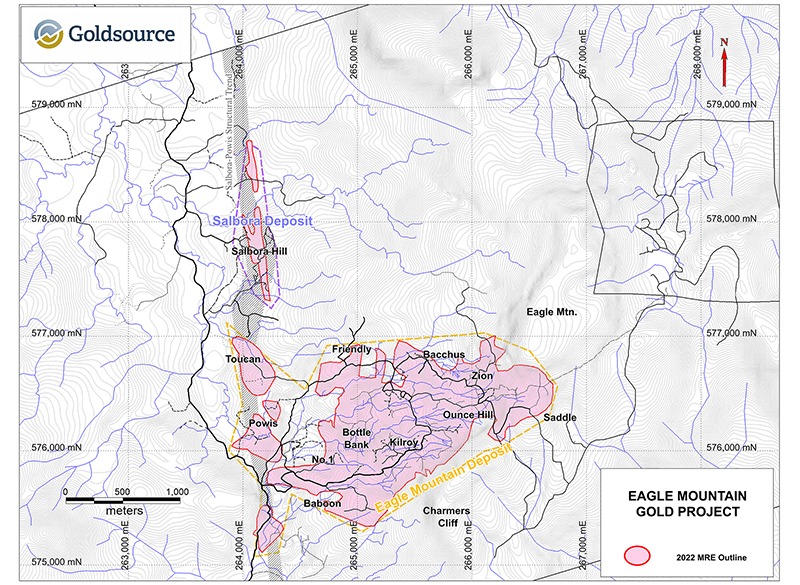 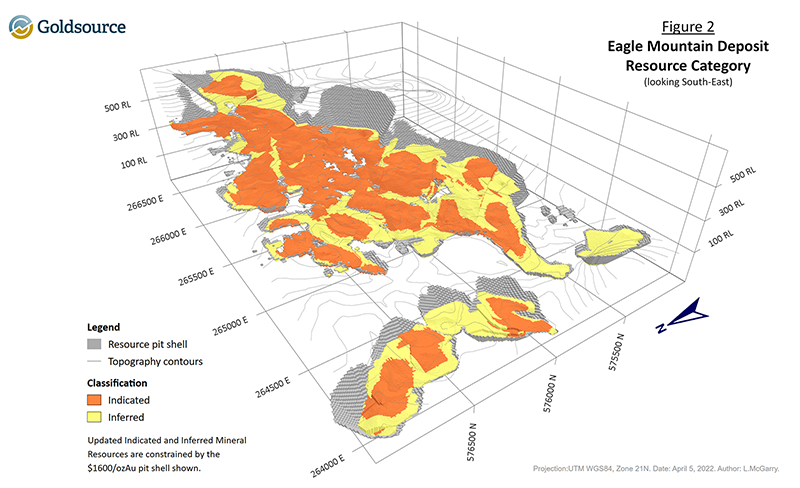 The Eagle Mountain Project comprises two gold deposits, Eagle Mountain and Salbora, in addition to several other exploration targets. The deposits are structurally controlled and considered to be part of the same mineralizing system. They are affected by a zone of saprolitic weathering up to 50 metres thick and overprints earlier-formed mineralization in both the granodiorite and basalt but has not resulted in enrichment of gold in the saprolite horizon. 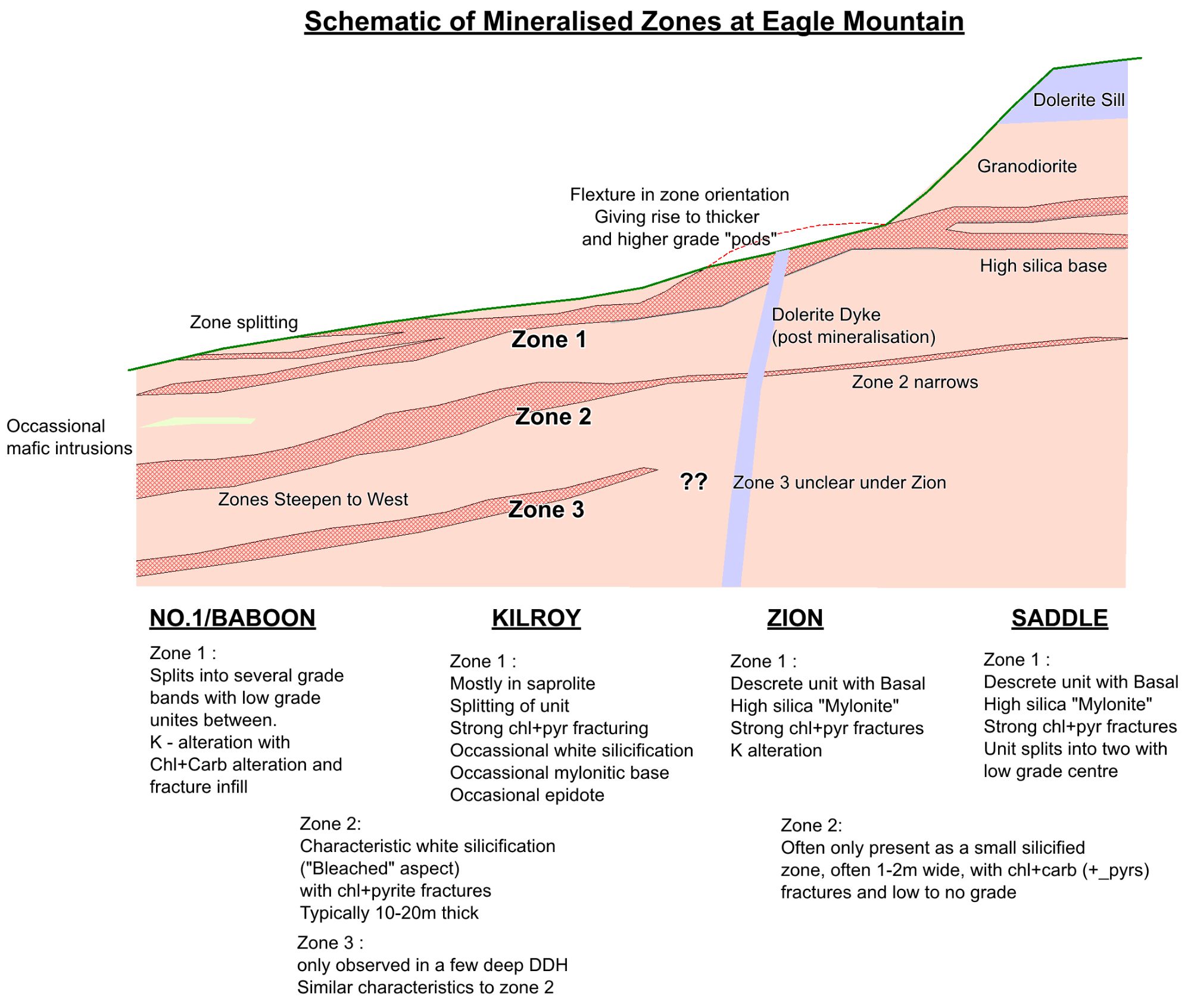 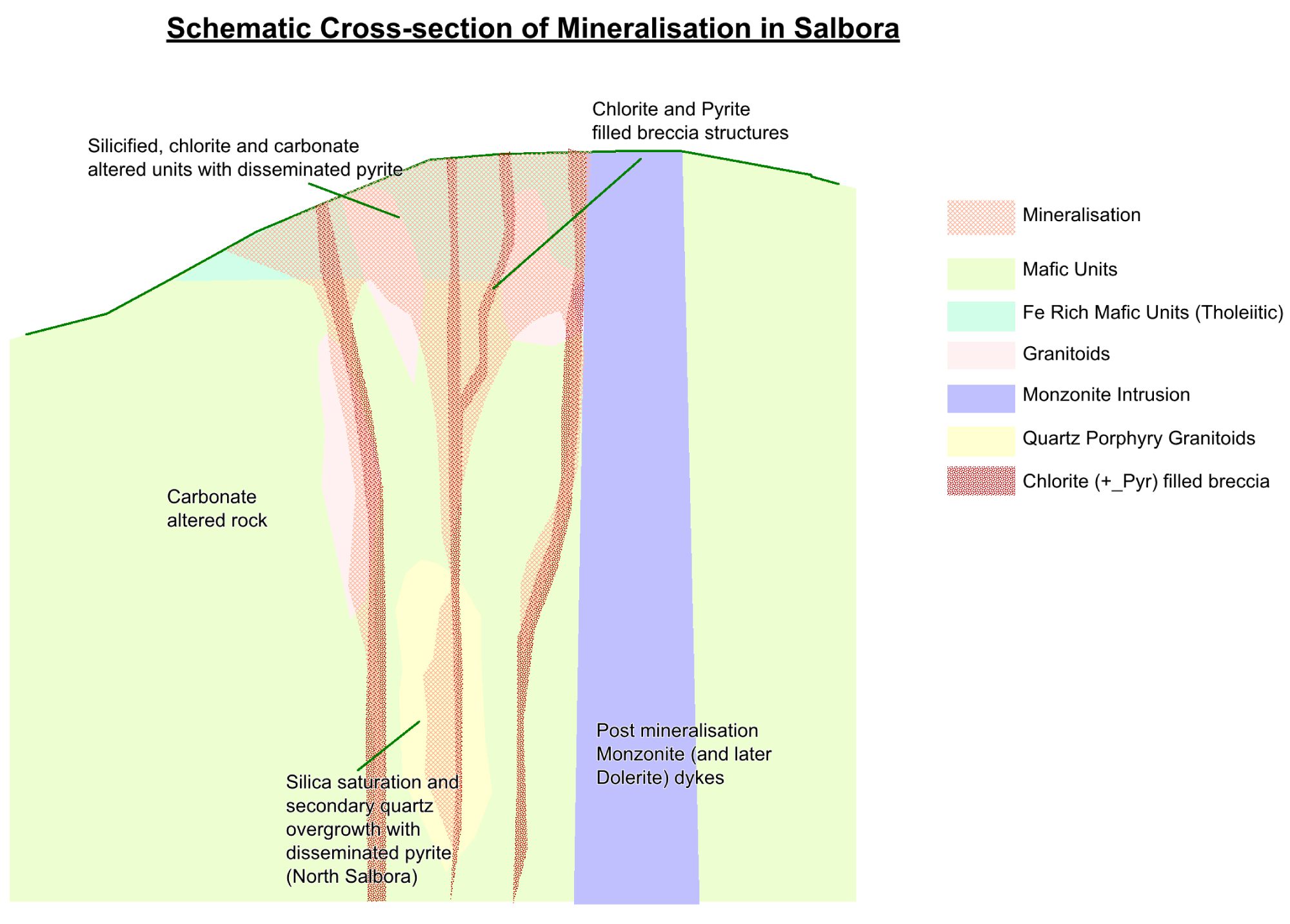 The 2022 program will include drilling and generative exploration activities as well as a significant increase in technical work to progress the prefeasibility study.

The Company’s exploration and engineering programs have the following primary objectives:

Completion of 25,956 metres of drilling

Expansion of the Friendly area with the Eagle Mountain deposit

Auger and initial core drilling of the high-grade Salbora area

Discovery of the Salbora area (trenching)

Initiated exploration program to expand the Eagle Mountain resource base

Goldsource announced the granting of a Medium Scale Mining Permit

3-year prospecting license granted to Golden Star Resources in October and then transferred to Omai Gold Mines Limited (a subsidiary of Cambior Inc) in December. Initial drilling of diamond drill holes in Kilroy and Zion Areas.

The Eagle Mountain Property (then known as the Minnehaha License) was granted to Golden Star Resources Limited as a 5-year Mineral Agreement.

First records of alluvial gold being mined in the area

N. Eric Fier, CPG, P.Eng., Executive Chairman and Chief Operating Officer of the Company, is the Qualified Person under National Instrument 43-101, Standards of Disclosure for Mineral Projects, responsible for the preparation of the technical information included in this website and for supervision of field activities related to the Company projects.

Guyana was originally colonised by the Netherlands. Later, it became a British Colony, known as British Guiana, and remained so for over 200 years until it achieved independence on 26 May 1966 from the United Kingdom. On 23 February 1970, Guyana officially became a republic. In 2008, the country joined the Union of South American Nations as a founding member.

Guyana is a member state of the Commonwealth of Nations and has the distinction of being the only South American nation in which English is the official language. The majority of the population, however, speak Guyanese Creole; an English-based Creole language with slight Dutch, Arawakan and Caribbean influences.

Modern Guyana is bordered by Suriname to the east, by Brazil to the south and southwest, by Venezuela to the west, and by the Atlantic Ocean to the north. At 215,000 square kilometres (83,000 sq mi), Guyana is the third-smallest independent state on the mainland of South America after Uruguay and Suriname.

Guyana contains one of the most prospective, yet under-explored, gold regions in the world. It has a long history of alluvial gold production, but only recently declared itself open to foreign investment and mineral exploration after enacting the Land Tenure Act in 2004. The self-financing Guyana Geology and Mines Commission (GGMC) is the government entity responsible for overseeing the country's mining and quarrying sector, a critical component of the Guyanese economy.

It is a stable parliamentary democracy with a population of approximately 770,000 people. Its currency is the Guyanese dollar, and its capital city is Georgetown, which is home to approximately 250,000 people. Guyana's other major cities include Linden, New Amsterdam, Rose Hall, Anna Regina, and Bartica.

WHY GUYANA IS AN EXCELLENT MINING JURISDICTION?