*based on coal density of 1.38 from lab and downhole geophysics testing 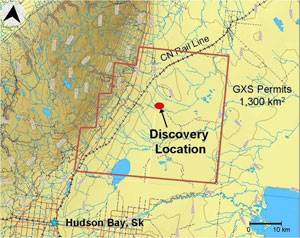 BORDER PROPERTY - The Border Property is the focus of a major coal discovery in 2008. It is located on the eastern edge of mining-friendly central Saskatchewan, about 50 kilometers north of the town of Hudson Bay. The Border Property consists of approximately 16,073 hectares. It is situated along the Durango Coal Trend, which continues to the southeast and northwest of the property. Infrastructure around the Border Property is excellent. The town of Hudson Bay has approximately 2000 inhabitants with a skilled labor force. A major road transects the property and power and water are readily available. A CN railroad line also runs through the property, adjacent to the recent discovery. 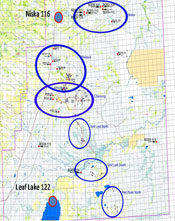 To date, 146 holes have been completed and drilling has identified 17 coal deposits at Border, with the recent Fugro airborne gravity surveys indicating good potential for additional coal discoveries and the expansion of several existing deposits.

The new discoveries are confirmation that the geophysical techniques used by the company are successful in identifying coal bearing sub-basins and will continue to be used in identifying other areas for drilling.

The coal is located approximately 80 metres below surface and is potentially open pittable. The coal is ranked as sub bituminous thermal coal. The calorific value of the coal ranges from 17,800 Kj/Kg (7684 BTU/lb) to 21,300 Kj/Kg (9,159 BTU/lb) on an "Air Dried" basis. The average calorific value of the coal is similar to the major producers of the Alberta Plains and the Powder River Basin.

A geological model based on all drill holes to date has been developed and initial coal resources of 79.1 million tonnes Indicated, 34.9 million tonnes Inferred have been announced in 2011.

Goldsource has incorporated data from the winter 2009 - 2010 drill program into an updated NI 43-101 Technical Report, which includes an updated resource model and revised estimates of 117 million tonnes Indicated and 33,000 tonnes Inferred.

The Company cautions that the PEA is preliminary in nature in that it is based largely on Inferred Mineral Resources which are considered too speculative geologically to have the economic considerations applied to them that would enable them to be characterized as mineral reserves, and there is no certainty that the PEA will be realized. Mineral resources that are not mineral reserves do not have demonstrated economic viability.

The Preliminary Economic Assessment ("PEA") was completed in March, 2011 under the direction of Marston Consultants and EBA Engineering Consultants. Initial results from the PEA concluded that:

From the holes drilled to date, the sub-basins appear to be comprised of discrete features containing exceptional coal zone intervals of up to approximately 100 metres thick with their limits defined by certain geophysical signatures and the underlying Devonian limestone. It is believed that the contours of underlying Devonian limestone continue to be a critical factor in defining the sub-basins and this information is being used to target other areas of potential coal deposition at Border.

Results from a Fugro airborne Falcon gravity survey completed in the spring of 2010 have been received. Initial assessment of the data shows more precise boundaries of existing deposits as well as newly defined targets. The Company believes that the test programs have enhanced its ability to identify new deposits and better define the boundaries of these unique deposits.

Management recognizes the project requires a special expertise and financial capacity to bring it to fruition and will actively seek out a participant with these capabilities. The Company intends to maintain the Border Property on a care and maintenance basis until such time as a suitable market and/or applicable conversion process can be identified or until such time as an appropriate partner can be identified to advance the project. The current coal lease holdings will be reviewed annually and may be reduced periodically to minimize holding costs.

N. Eric Fier, CPG, P.Eng., Qualified Person, Chief Operating Officer is also the Qualified Person responsible for the preparation of the technical information included in this web site and for supervision of field activities related to the Company projects.